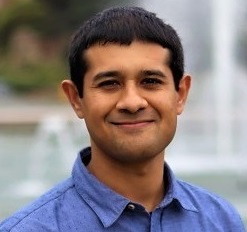 Aranya Chakrabortty received his PhD in Electrical Engineering from Rensselaer Polytechnic Institute, Troy, NY in 2008, following which he was a postdoctoral research associate at the University of Washington, Seattle, WA. In 2010, he joined the Electrical and Computer Engineering department at North Carolina State University, where he is currently a professor. His research interests lie at the intersection of control theory and electric power systems, focusing on various research problems pertaining to integration of renewable energy (wind, solar, energy storage) in the power grid, and their impacts of dynamics, system identification, and control. Recently, he has also started taking an active research interest in the area of real-time data-driven monitoring and control of power grids, especially along the lines of multi-agent reinforcement learning and game theory. He is a Senior Member of IEEE, and a 2019 NCSU Faculty Scholar. He received the NSF CAREER award in 2011. He is currently serving as a program director at the US National Science Foundation (NSF) where he manages a wide range of research portfolio on energy, infrastructures, and climate change solutions.

Within this coastal resilience group, besides my usual research in power systems and renewables, I am interested in working on the following two topic areas, and would like to establish collaborations along these lines:

2. Modeling and control of water networks, applications of data-driven methods for understanding water networks, and how the cross-coupling between water and energy infrastructures can be made more efficient and robust.

In the current state-of-the-art machine learning based real-time control and decision-making in large-scale complex networks such as electric power systems is largely bottlenecked by the curse of dimensionality. Even the simplest linear quadratic regulator design demands cubic numerical complexity. The problem becomes even more complex when the network model is unknown, due to which an additional learning time needs to be accommodated. In this 3-year NSF CPS proposal, we take a new stance for solving this problem, and propose a hierarchical or nested machine learning-based scheme for real-time control of extreme-dimensional networks. Our approach will be to design appropriate projection matrices by which a network can be divided into disparate sets of non-overlapping groups depending on the low-rank properties of their controllability grammian, and multiple sets of composite controllers can be learned independently for each group using model-free reinforcement learning. Accordingly, the control goals of the network will also be decomposed into local (microscopic) and global (macroscopic) reward functions. Local controllers will be designed via privacy preserving group learning, and the global controllers via model reduction and averaging. Sparsity-promoting structures will be imposed on top of the local controllers to reduce their communication complexity. Deep learning algorithms based on historical events will be used to train recurrent neural networks so that they can rapidly predicting these sparse projections after any disturbance event in the network. Throughout this entire exercise, wide-area control of power systems using streaming Synchrophasor data from Phasor Measurements Units (PMUs) will be treated as a driving example. Results will be validated using standard IEEE models, a simplified model of the Japanese power grid with high-scale solar penetration, and an Opal-RT model of the Duke Energy power grid integrated with the ExoGENI cloud computing network at the FREEDM Systems Center.

Through multidisciplinary doctoral education in Cybersecurity for Electric Power Systems (CEPSE), North Carolina State University (NCSU) will increase its commitment to graduate training in two areas designated by the GAANN Program as critical to national need: Cybersecurity and Electrical Engineering. The goal of is to enlarge the pool of U.S. citizens and permanent residents who will pursue teaching and research careers in cybersecurity for electric power systems, thereby promoting workforce development and technological innovation impacting, national security, energy security, and environmental sustainability.

This proposal will generate new results on application of machine learning in power system controls.

Dr. Chakrabortty will be serving as a program director in the ECCS division of NSF under an IPA agreement.

This project will address the growing concerns of wind and solar power integration from the perspective of power system dynamics and stability. We propose a new retrofit control technique where an additional controller is designed at the doubly-fed induction generator site inside the wind power plant, or the power electronic converter models for battery satorage units that may be accompaying a wind or solar power plant. This controller cancels the adverse impacts of the power flow from the wind side to the grid side on the dynamics of the overall system. The main advantage of this controller is that it can be implemented by feeding back only the wind states and wind bus voltage without depending on any of the other synchronous machines in the rest of the system. Through simulations carried out in our hardware in the loop testbed at the FREEDM center we plan to show how the proposed control technique can efficiently enhance the damping performance of a power system variable despite very high values of renewable penetration.

The proposed project will apply risk segmentation, adaptive credit scoring and network-based portfolio analysis techniques from financial engineering and risk management for risk analytics of power systems at both asset and system levels. At the asset level (Thrust 1), the project will introduce risk segmentation of an assetÃƒÂ¢Ã¢â€šÂ¬Ã¢â€žÂ¢s throughput by applying tranching similar to collateralized debt obligations. The risk-free to most risky tranches will be assessed for their risk profile in terms of risk scores taking into account the variability of the renewable resource (wind or solar), presence of storage units or services that they may be equipped/associated with, and the assetÃƒÂ¢Ã¢â€šÂ¬Ã¢â€žÂ¢s locational specification. This risk scoring will be designed to be adaptive based on system level (Thrust 2) feedback at different contractual time-scales, starting from sub-seconds to tens of minutes, to determine asset suitability as an energy, regulation, spin, non-spin, or replacement reserve. Novel copula-based probabilistic risk models will be developed for the joint correlation structures between different contract tranches of assets for asset and system level risk assessment.

Cybersecurity for next generation ECUs

In the current state-of-the-art, data-driven machine learning based control of large-scale complex multi-agent networks systems is largely bottlenecked by the curse of dimensionality. Even the simplest linear quadratic regulator design demands cubic numerical complexity in real-time. The problem becomes even more complex when the network model is unknown, due to which an additional learning time needs to be accommodated. In this project, we seek to take a different approach, and investigate a hierarchical reinforcement learning based control scheme for extreme-scale multi-agent swarm networks. Here, control actions will be taken based on low-rank information from data instead of models. The approach will be to decompose a control objective into multiple smaller hierarchies, such as group-level microscopic controls that can be learned using dense but local data only, and a broad system-level macroscopic control that steers the swarm in its desired direction but using only high-level sparse data. Each hierarchy will have its own learning loop with local and global reward functions. The control goal of the network will be decomposed accordingly into local (microscopic) and global (macroscopic) reward functions. Local controllers will be designed via private group learning, and the global controllers via model reduction and averaging. Sparse controller structures will be imposed on top of the local controllers to reduce their communication complexity. Deep learning algorithms based on historical events will be used to train recurrent neural networks so that they can rapidly predict these sparsely structured projections following any disturbance event in the network. One driving example, which will be used as a benchmark for simulations, is joint target-tracking and interception using swarms of ground vehicles and air vehicles. The ground vehicles will be divided into teams that are autonomously formed through learning. Agents in each team will learn a local reinforcement learning control that can track detailed microscopic dynamics of a target while respecting individual formation constraints. The air vehicles, on the other hand, will serve as higher-level coordinators that learn a global reinforcement learning control using low-resolution and low-rank data to provide a macroscopic view of the target motion in terms of the movement of centroids.

The objective of this research will be on improving dynamic performance of New York State (NYS) power grid using supplementary Wide-Area Damping Control (WADC) with shunt-connected FACTS devices and Wind farms as the control actuators. The NY state is moving towards more renewable generation. The state of New York already undertaken a comprehensive energy strategy, known as Reforming Energy Vision (REV), for building a clean, more resilient, and affordable energy system. One of the major goals of REV is to reach 50% renewable generation by the year 2030. Bulk wind power integration will be a major contributor in reaching this goal. Different research conducted by New York Power Authority (NYPA) and FREEDM Systems Center have shown that high wind penetration can impact the grid oscillation properties adversely and can induce poorly damped inter-area oscillatory modes. This could result in destabilization of the power grid. In wake of this scenario, NYPA is considering to implement Wide Area Controllers within their territory. NYPA has already installed multiple Phasor Measurement Units (PMUs) all across the grid. Currently, data stream from PMUs is being used to provide Wide-Area Situational Awareness (WASA) for the system operators; however, this data is not being used for any decision making and control-based remedial action for grid operation. Recently more emphasis is given to use this Wide-Area Measurement Systems (WAMS) in order to design oscillation damping controllers. This research will look into explore the feasibility, constraints and possible solutions for the real-life implementation of wide-area damping controllers through FACTS and Wind farms in New York State Grid.